Percy came to me in Feb ‘18 to foster, very stressed and hyper after an op to repair an eye left untreated after serious damage.  He started to settle but the eye was too far gone, needing removal after 6 weeks, then he could thrive.

I had already adopted him once confident he’d be accepted into my family of small older terriers, who at first had to shrink from this bargy newcomer in a cone helmet which doubled as a road sweeper for shovelling stray crumbs at floor level.  But treated as every pug deserves, his happy confidence soon emerged, albeit with a brand of mischief only we pug people appreciate!

A PDWRA trustee came to stay after a long drive, I was showing her round … a lovely home-made cake was set on the table …. You can guess, but the humans ate the half remaining anyway, every morsel!! 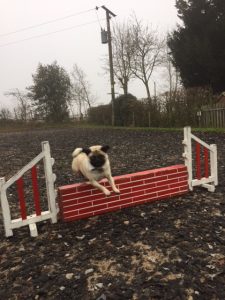 A go at Pugstacles at the wonderful Sandbach party inspired us to join Jo Bargman’s agility class for family pets. Once Percy twigged that the jumps were for jumping and not squeezing under like farm gates, he was well away, and earned the respect of all for what one-eyed pugs can do, and always several
steps ahead of his handler!

Perhaps he’d been embarrassed at finding himself in the class for Welfare pugs with special needs at Bark in the Park!  “Special needs …. I’ll show her!” 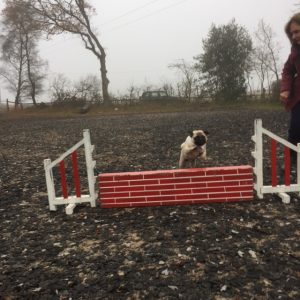