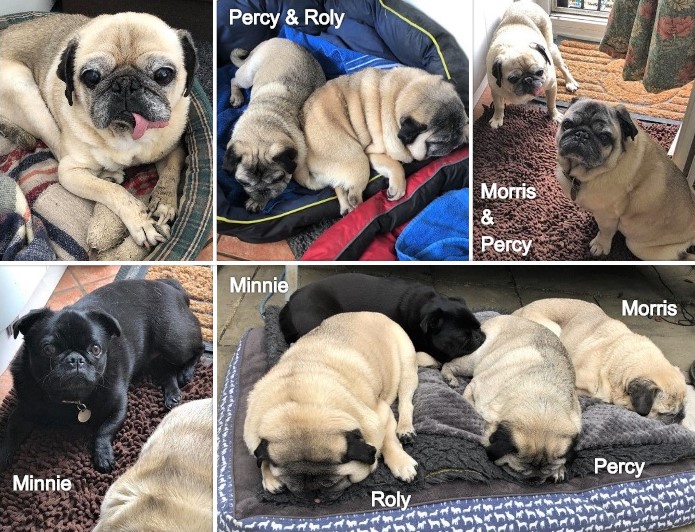 It was unusual that PDWRA couldn’t find an interim foster home or an adopter for Morris. Meantime after collecting the timid, toothless gent, we enjoyed making him feel at home with my other 3 pugs too. He came with little but now has his own bed, bowls, harnesses and toys to call his own.

Since having him, Morris has slowly come out of his shell. He follows Minnie pug around everywhere, and they can often be found in the garden together chasing after the birds. He loves on occasion to play with a squeaky toy or a ball and chases it around the kitchen. Never in my wildest dreams did I ever think he would want to play with toys, he was so anxious. He learnt to bark at the TV along with Minnie, which is so funny, as Morris has a strange bark, due to his tongue always hanging out.

Well, Morris was my mum’s maiden name, so I suspected I was meant to have him, that it was meant to be? PDWRA agreed so he’s going nowhere. I certainly wouldn’t be without my Morris now, who I love dearly.

On warm afternoons, once they have all had lunch, my nearly blind Percy and Morris can be found on the bed in the warm conservatory sound asleep side by side, so lovely, two old boys together in their retirement home! Roly is my other boy who can’t control his rear legs or functions, so commands a lot of my attention which is why I wasn’t planning to increase my grumble, but I’m glad I have, and Morris can at least have some fun and mischief with his puggie family for the rest of his days.