Charlie is a lively 3 year old, who was surrendered to us ultimately due to his Mum’s increasing working hours, which meant that she was unable to give the supervision and attention that Charlie needed. He was quite a demanding boy who enjoyed being the centre of attention, was very reactive to noises or people and would try to bolt whenever the front door opened! Unfortunately, he also became irritating to their other dog, such that they eventually needed to be kept separated.

We placed Charlie with an experienced fosterer who put him through the necessary training to reform from being the pug equivalent of Houdini, to soon learning not to jump on tables and work surfaces or dashing out of the front door at the first opportunity. He was ready to go to his new forever home, where he’s now having a great life by the seaside.

This message is from Charlie’s new Mum:

“Firstly, we would like to thank PDWRA for giving us the opportunity to have Charlie in our lives. He bounced into our hearts 5 weeks ago and he hasn’t stopped bouncing! He is such a wonderful little character and has made our home feel whole again. We have learnt that he loves his food, his walks, stealing toys so that boys will chase him, and cuddles. He loves racing around the garden barking at anything that flies over from aeroplanes to birds and even butterflies. His snores are the loudest we have ever heard.  He has settled in really well and I think if he could speak, he would say he is happy!”

We think he looks happy in these photos, too! 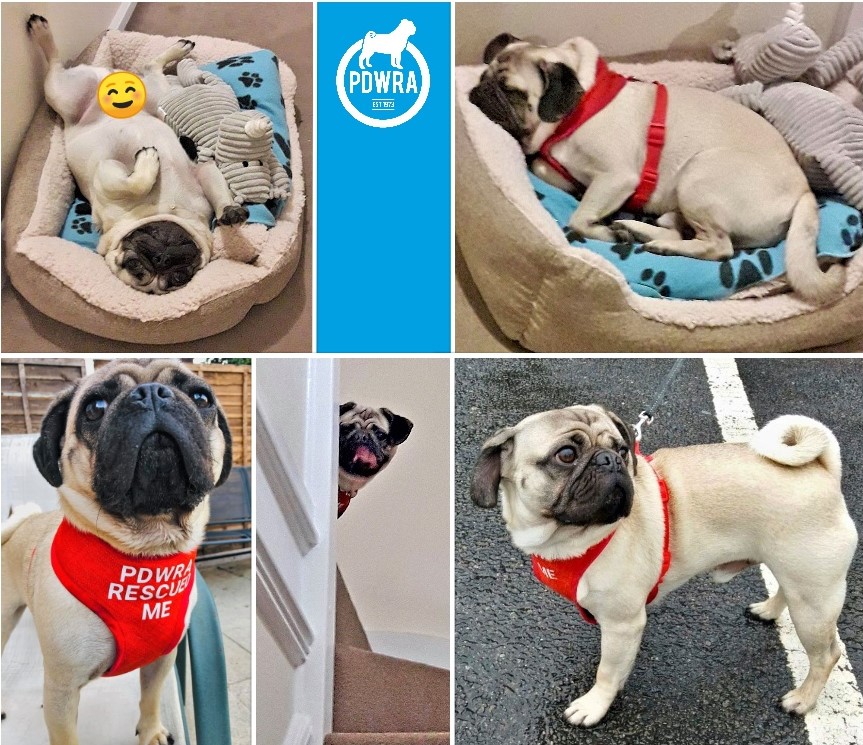